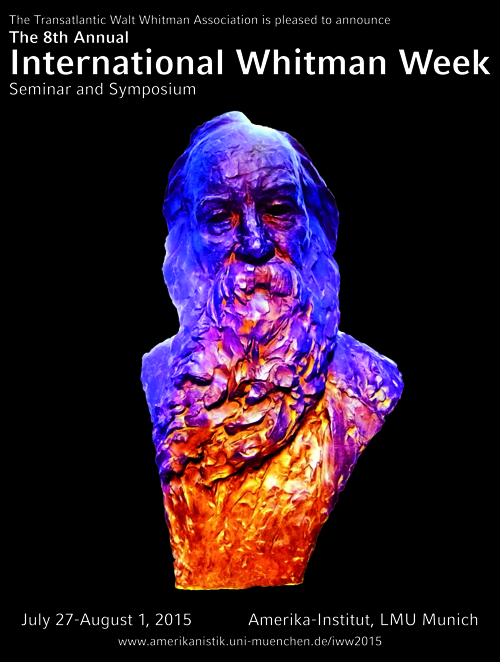 In the morning classes, focusing on some of Whitman’s major poems and selections from his prose, students had an opportunity to confront Whitman’s books, share their readings of key poems and clusters, and discuss Whitman’s attempts at a multilingual English, his cohesive representation of human relations, and his work’s international significance. In addition, there were afternoon workshops on the reception of Whitman in various countries, as well as the translation of his poems into various languages, including German, French, Italian, Spanish, Portuguese, Polish and Asian languages.

The international instructors for 2015 were:

Eric Athenot: Professor of American Literature and Translation studies at the Université Paris-Est Créteil (Upec), France. He has carried out the first French translation of the 1855 Leaves of Grass, and he will publish a translation of Whitman’sAn American Primer and Collect in 2015. He is the author of numerous articles on Whitman and the book Walt Whitman, poète-cosmos. He has taught and given lectures on Whitman all over the world and is one of the founders of the Transatlantic Walt Whitman Association.

Taylor Hagood: Associate Professor of American Literature at Florida Atlantic University; author of “Hair, Feet, Body, and Connectedness in ‘Song of Myself’” (Walt Whitman Quarterly Review), “‘Nobody Knows but Me’: Jimmie Rodgers and the Body Politic” (Walking the Line: Country Lyricists and American Culture, ed. Thomas Alan Holmes and Roxanne Harde), and multiple publications on the literature and culture of the US South, African American literature, and the writing of William Faulkner.

Kerstin Schmidt: Professor of English and Chair of American Literature at the Catholic University of Eichstaett, Germany; her second book ms. on “Negative Space and the Making of Modern America: Concepts of Space in American Literature, Architecture, and Photography” presents an in-depth reading of concepts of space and place in Whitman’s writing; other areas of expertise are modern/postmodern American drama and theater, ethnic literatures in the US and Canada; race and diaspora studies, media theory (esp. radio), and visual culture studies (esp. photography).

The 2015 International Whitman Symposium took place on the Sesquicentennial of the publication of Whitman’s Drum-Taps and Sequel to Drum-Taps, his poems about the Civil War and Lincoln’s assassination.  The symposium also took place 150 years after the end of America’s Civil War. Since the U.S. Civil War ended, there have been over 200 new civil wars around the world, and at least twenty are still ongoing.

We invited papers for this symposium that consider the nature of Whitman’s achievement in Drum-Taps and Sequel to Drum-Taps; that examine his war poems in relation to his prose (including his Civil War journalism and his Memoranda During the War); that examine the ways that writers (and other artists) from Whitman’s time to the present have called upon Drum-Taps to help them understand and respond to new civil wars; and that examine Whitman’s impact on war poets of the late-nineteenth, twentieth, and twenty-first centuries.